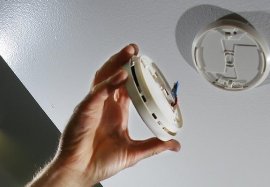 Two of the faulty alarms which came from UK-based suppliers, have since been removed from sale. The third was available from several well known online websites and may still be available.

Further concerns expressed over CO alarms have arisen following a recall by Sensor Safe of its SF80190 alarm, according to the Coleraine Times.

A recent Gas Safety Trust report also revealed that five alarms were not working at 11 sites where CO poisoning had occurred. Two were described as ‘battery out of date’, with no other data available for the other three.

Another Report by Gas Safety Trust covered accidental carbon monoxide (CO) incidents in Great Britain associated with the use of natural gas and piped Liquid Petroleum Gas (LPG) in the home.

The report, funded by the Gas Safety Trust and prepared by Downstream Gas, found that during the period 1 July 2012 to 30 June 2013 there were 29 incidents resulting in 62 non-fatal casualties and two fatalities.

Of the two fatalities reported in this period, one involved the blockage of a chimney serving a gas fire whilst the other involved an old open flued floor-standing boiler that had not been serviced for many years.

The private rental sector was involved in a greater number of incidents, where mains natural gas was the fuel, than any other sector. The Gas Safety Trust recommends:

- Requiring an operative to make a combustion performance measurement on open flued boilers and warm air units when carrying out a Landlord’s Safety Check.

- Requiring CO alarms to be installed with a record made of details on the Landlord’s Safety Check Risk Assessment form.

- Promoting or even requiring regular servicing of appliances.

Open flued appliances figured highly in the number of CO incidents reported. Using an open flued boiler represented over four-times the risk of being involved in a RIDDOR reportable incident compared to a room-sealed boiler.

The report also found that a lack of servicing or sub-standard servicing was the most frequently reported preventable contributory factor in a gas related incident.

Given this evidence it is surprising that the new regulations on CO alarms restrict them to solid fuel devices in rental properties when it seems gas appliances also present a considerable risk.

Landlords should make sure that the CO alarms they supply are from main line manufacturers and preferably with long-life batteries and 10 year guarantees.

It is important that tenants are made aware that regular testing is required and this information should be stated in the tenancy agreement as supporting tenant operating and safety information for the letting. Manufactures are recommending testing once a week:.

- They’re easy to check; simply press the test button that is visible on the unit
- The unit will emit a loud alarm for approximately five seconds and then stop automatically
- There is usually an LED light that will also flash during the audible signal
- If the alarm does not sound or flash, this is a sign that the batteries or the alarm need to be changed.

Carbon monoxide detector test kits can be purchased. They include a small container full of gas at a high CO concentration, usually up to 1000 ppm and a plastic housing that you put around the detector for the test. However, this test proves only that your carbon monoxide detector will respond to a CO level well beyond the lethal range.

It is advisable to install CO alarms in all situations where there is risk of CO, including solid fuel, LPG and natural gas fires and boilers.

The CO alarms can be tested for correct operation hen the annual gas safety check is carried out by a Gas Safe Registered Engineer.