Aberdeen is Scotland’s third most populous city and is situated on the North East coast of Scotland. The Aberdeen area has been populated for over 8,000 years and is well situated at the mouths of the River Dee and the River Don. Aberdeen is still a fishing port but more of its economy is based around the North Sea oil industry. Aberdeen is also home to two universities. In this article we will take a closer look at the coastal powerhouse that is Aberdeen. 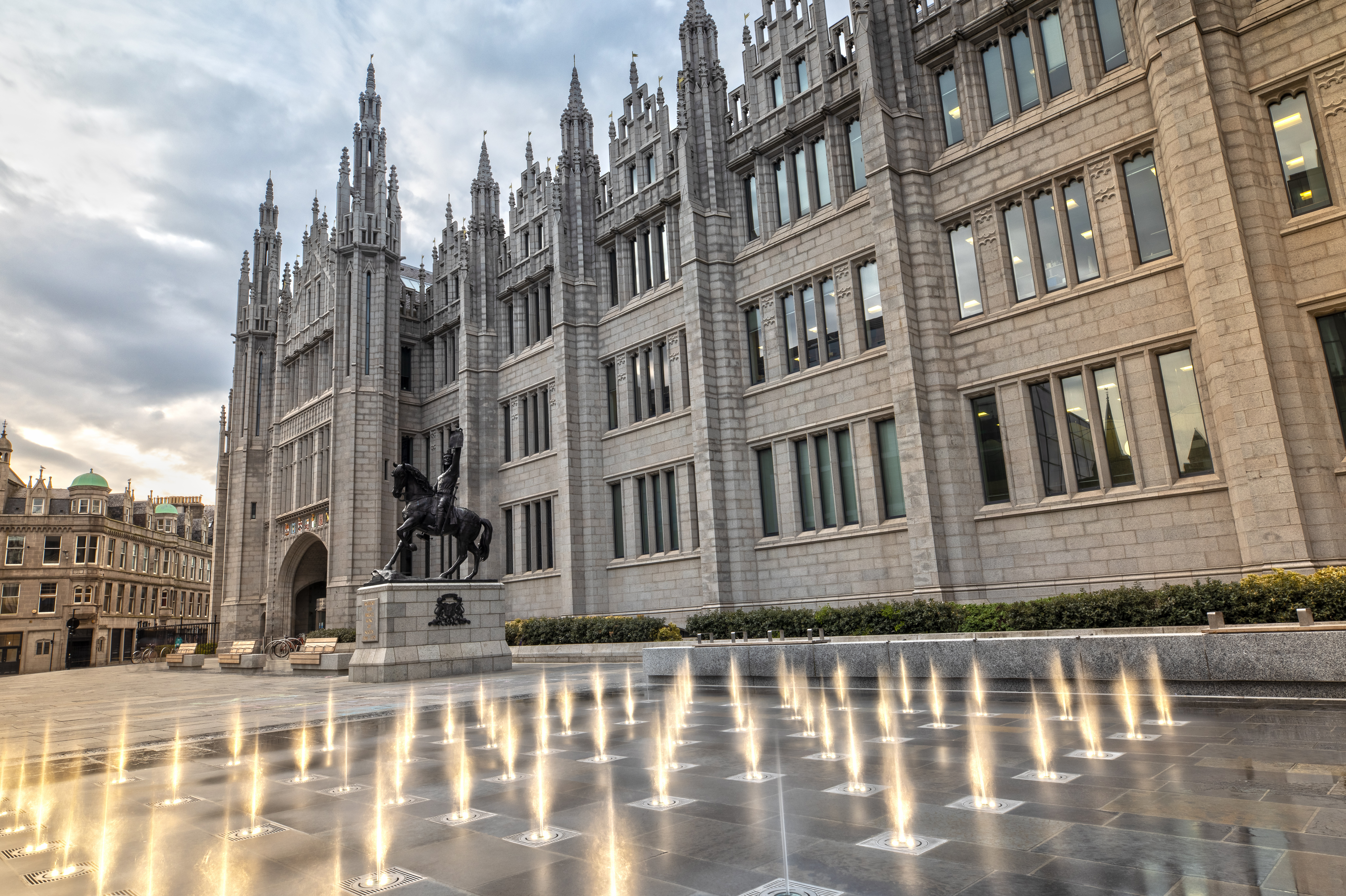 Aberdeen is served by its own airport which serves airports in over 100 destinations throughout Europe and North Africa including places such as Alicante, Copenhagen, Tenerife and Enontekio in the north of Finland to name a few. The airport hosts 17 different airlines from KLM and BA to EasyJet and Wizz.

Aberdeen has great railway links and is served by ScotRail, Crosscountry, the Caledonian sleeper and LNER. Aberdeen train station serves all major routes throughout Scotland and has direct links to London, although at the time or writing there was a bus replacement service on these routes due to disruption between Aberdeen and Dundee. Aberdeen boasts the UK’s longest direct rail journey which, taking a whopping 13.5 hours, will take you all the way to Penzance.

Aberdeen is well connected via a good road network and is a 2.5 hour drive from Edinburgh or Glasgow with good road links to take you South of the border via the A90

Aberdeen is steeped in history; it was first settled around 6,000 BC. Around 2,000 BC the famous stone circles that can be found in the area were built by the Beaker people who came from the Rhine lands. The Romans came to the area in the first century AD. During the 12th Century, David the first developed what was called New Aberdeen, which is north of the River Dee and Aberdeen became two separate Burghs: the Old Aberdeen on the mouth of the River Don and New Aberdeen to the north of the River Dee. In the 19th Century the City began a huge period of expansion with the growth of the shipbuilding and fishing industries. These are no longer as important to Aberdeen, as in 1969 significant reserves of oil were found offshore near Aberdeen and it is now arguably the largest oil producing area in Europe.

Things to do in Aberdeen

Aberdeen is a vibrant city elbow deep in history, there is more than enough to do to keep everyone busy. For the gin lovers, why not take a trip to Aberdeen’s first gin distillery, which has been in operation for over 80 years and is now home to the Aberdeen gin school where you can even distil your own personal gin. For nature lovers why not head down to the harbour and take a boat out to sea to try and spot some local wild dolphins, if you’re lucky you might glimpse bottlenose dolphins, white beaked dolphins and even Minke wales. For those of you interested in local architecture and history take a trip into old Aberdeen where the cobbled streets will take you back in time and you can visit the 14th Century St Machar’s Cathedral.As a coastal town, no visit to Aberdeen will be complete without a trip to the beach and the esplanade which boasts many shops, cafes and even an art-deco style ballroom.

Aberdeen has a whopping 5 shopping centres and has a host of smaller boutiques and independent retailers. There really is something for everyone in Aberdeen. One of the easiest shopping areas to get to is Union Square just by the main train station which has over 50 high street stores and over 30 restaurants and cafes along with a 10 screen cinema. Then there is the Trinity shopping centre and the Bon Accord centre. For a wealth of independent shops take a visit to the well established West End and Rosemount shopping centres.

When it comes to gastronomical delights, in Aberdeen you are spoilt for choice, there are 8 restaurants in Aberdeen and the surrounding area that are mentioned in the Michelin guide for their quality of food including The Rothesay Rooms in Ballater, the Cock and Bull pub in Balmedie and the Tolbooth Seafood Restaurant in Stonehaven. If you are a lover of craft beer, then Aberdeen really is place for you. It is home to the Brewdog Flagship bar but is also home to many other craft beer bars with 7 in the city centre alone. Being in Scotland, Whisky is a must and Aberdeen has everything on offer a Whisky connoisseur could desire, including dedicated whisky bars and distilleries. So why not take a trip to the Glen Garioch distillery or the former world whisky bar of the year The Grill.

If you are more inclined to rent, then rental prices are starting at £460 per month and three bedroom properties averaging £906 pcm, stats thanks to home.co.uk.

Aberdeen is a magical city, steeped in history with plenty of culture and a modern outlook. The City has something for everyone and is a wonderful place to live. If you are considering relocating to Aberdeen, then enlist the help of local property experts. Our Aberdeen office can assist you with buying, selling or renting and Aberdeen property