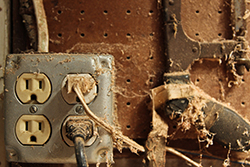 The Government is intent on cracking down on those rogue landlords who stand accused of cramming thousands of vulnerable immigrants into these so call “beds in sheds”. These are makeshift accommodations which consist of, in the main, garages, sheds and outbuilding hastily and covertly converted into totally unsuitable and unsafe living spaces.

Plan are in train to bring fines of thousands of pounds against these ‘rogue’ landlords, Mr Lewis has said, plus there will be new powers introduced to short-circuit the usual long-winded and resource hungry legal processes, to demolish these sheds and other unsafe buildings that house the vulnerable migrants.

There is also a deadline in place to introduce compulsory “Right to Rent” immigration checks across England from the 1st of February 2016. From this date all landlords will need to carry out these detailed pre-renting checks before renting otherwise they will faces fines for every illegal immigrant they rent to.

“The actions of these rogue landlords are helping fuel illegal working, benefit fraud, and illegal immigration by creating a shadow housing market that carries dangers to people’s health as well as communities.”

The rogues operating these businesses are able to charge hundreds of pounds a month for the dilapidated sheds by packing people in like Sardines in a can, and the practise is said to be rife in parts of London: in East Ham, Newham and Forest Gate in particular. The sheds have been described as “little bigger than rabbit hutches”.

The Government is now promising local authorities money to tackle this problem, with £5m up for grabs by those councils who claim successfully for the funding. Councils will be encouraged to use the money to carry out raids on these types of properties, demolish them and start more prosecutions.

More than 3,000 landlords are currently facing enforcement action or prosecution.

Mr Lewis has said that since 2013, almost 40,000 property inspections have been carried out by local authorities some having been given extra funding in the recent past to tackle the problem.

“The majority of tenants are happy with their home, but the private rental sector is still afflicted by to many rogues – who rent dangerous, dirty and overcrowded properties without a thought for the welfare of their tenants.

“That’s why we are inviting the worst affected councils to come forward and apply for extra funding so they can root out the cowboys and rogue operators.

“The Government is determined to crack down on rogue landlords and this funding will further strengthen councils’ powers to tackle poor-quality privately rented homes in their area,” Lewis has said.

The forthcoming Housing and Planning Bill will contain additional measures to tackle and ban the rogue operators. This follows a full consultation on these issues involving with landlords, agents, landlord bodies, local authorities and MPs. These measures will include the ability of local authorities to issue penalty notices to landlords of up to £5,000 and create a database of banned rogue landlords.

In some districts, the Daily Mail has identified, whole rows of outhouses and garages, hidden away behind residential properties, have been transformed into makeshift bedsits, barely big enough to lie down in. They were reported to include “inflatable mattresses and bare electric wires near rubber piping carrying cold water”.