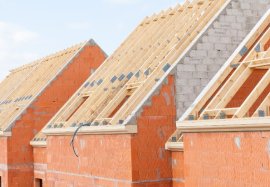 Despite a rise in the number of housebuilding schemes, the actual number of houses being completed in the UK is actually falling, suggesting the government is not on track to hit its target of 1 million new homes by 2020.

Data from the Department for Communities and Local Government (DCLG) shows that there were 34,920 new homes completed in the April to June 2016 quarter, up 7% on the previous three months but down 2% on a year earlier. In the 12 months up to June, 139,030 homes were completed which is up 6% year-on-year. Despite this, supply still is not meeting demand with statistics from the Office of National Statistics showing that rents in the private sector have risen 2.4% across the UK in the 12 months leading up to July.

Many in the property industry agree that that the lack of supply of new houses is a real issue. The current rate of house building is falling far short of the government’s target of the 200,000 homes a year needed to address the housing shortage across the UK.

"At the current rate, we will fall well short of the government's target of one million new homes by 2020, and fail to make inroads into the sharp housing shortage in the UK," said Rod Lockhart, managing director at LendInvest, who believes that government need to be looking at ways to "jumpstart" the housebuilding industry.

One issue restricting the supply of new houses is that the planning and permissions process is taking too long.  The government has attempted to simplify the planning system, in 2012 they introduced a slimmed-down National Planning Policy Framework. Property economist at Capital Economics, Matthew Pointon said, “In the past, planning was a big part of why we didn't hit our targets", but he believes the NPPF is working.

The Home Builders Federation, however, says that it can still be slow to get from the outline stage to detailed planning. There are over 150,000 plots for new homes with outline planning permission that are stuck in the system waiting for detailed permission, says HBF spokesman Steve Turner.

With the steady rise in detailed planning permissions being granted over the last four years, from 158,000 in 2011 to 240,000 in 2014, the government maintains that the new planning system is speeding things up.

How to price your property to sell Does Tesco have the answer to the housing crisis? Dealing with noisy neighbours Do you live in a 'happy' place? Britain needs 5 million new homes