Half of middle-class children now being raised in rented accommodation 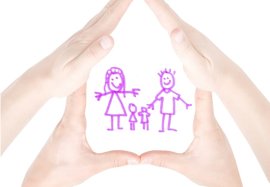 Half of middle-class children are now being brought up in rental accommodation, according to research by the Institute for Fiscal Studies (IFS). The rise in property prices is resulting in couples starting a family before they can afford to buy their first home.

The research shows that over the last 20 years, home ownership has fallen sharply among middle-class families with children, with figures falling from 69% being home owners in 1995, to just 50%. In this same time period, the number of middle-income families living in private rented accommodation has more than doubled. The IFS defines middle-income families as those that have an average annual household income of £30,000.

Even though the income of these families has increased since the financial crisis, partly due to more generous benefits such as child-support, house prices have risen so steeply due to high demand, that getting on the property ladder has remained out of reach.

Jonathan Cribb, an author of the IFS report, said: “Middle-income children are more similar to low-income children than they were 20 years ago. This is partly due to higher income growth for poor families with children, driven by falls in worklessness. Falls in home-ownership have affected middle-income families much more than their high or low-income counterparts.”

The Government is taking steps to address the issue, with schemes such as the ‘Help-to-Buy’ Isa amongst others, but research conducted recently by the property website Rightmove for The Daily Telegraph showed that 46% of three and four-bedroom homes in the UK cost more than the Help-to-Buy Isa’s maximum purchase cap of £250,000 or £450,000 in London.